If there’s one skill that I know teachers love to teach, it’s characters!  There’s just something special about reading a book and connecting to a character whether it be through their traits, experiences, family, or so much more!  Teaching characters shows readers that they can find themselves in stories.  They can find characters like them or characters very different from them to learn from.  And of course, the best way to teach about characters is through strong and unique mentor texts.  I have six amazing character mentor texts to share with you today! 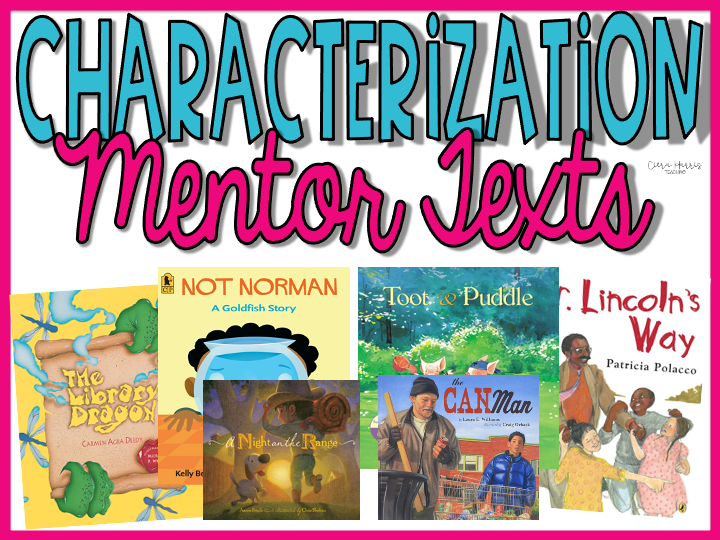 (This post contains Amazon affiliate links.  This means that Amazon sends me a little pocket change, at no cost to you, if you purchase through one of these links.  This helps keep my site running and funds giveaways for you!)

Character Mentor Text #1:  A Night on the Range

A Night on the Range is an absolutely adorable story about a young boy named Cole who passionately wants to be a cowboy.  He talks the talk and walks the walk and even uses beef jerky as his straw to chew on.  He knows every famous cowboy by name and since he is now seven years old, he thinks it’s time to start staying outside where the cowboys sleep instead of inside like normal people.  But sleeping outside ‘on the range’ doesn’t go as planned for Cole.  Read to find out what happens to this adorable little cowboy!

This is a great book for teaching characterization for many reasons.  One reason is that the book focuses solely on Cole.  The only other character in the book is Cole’s father, but he has a very small part in the story.  The story focuses on Cole, his dreams, his thoughts, his actions.  So when teaching students about how to analyze a character, this book allows you to do so easily without all of the added input from other characters and events.  The book itself is almost like its own character analysis.  By using this mentor text, you’re able to introduce all of the different aspects of characterization (change in character, character traits, character relationships, etc) to your students and use one text to analyze each character aspect.

Not Norman is a super fun and easy read and especially perfect for lower grade levels.  Not Norman is about a young boy who wants to get his first pet.  He gets a fish and is 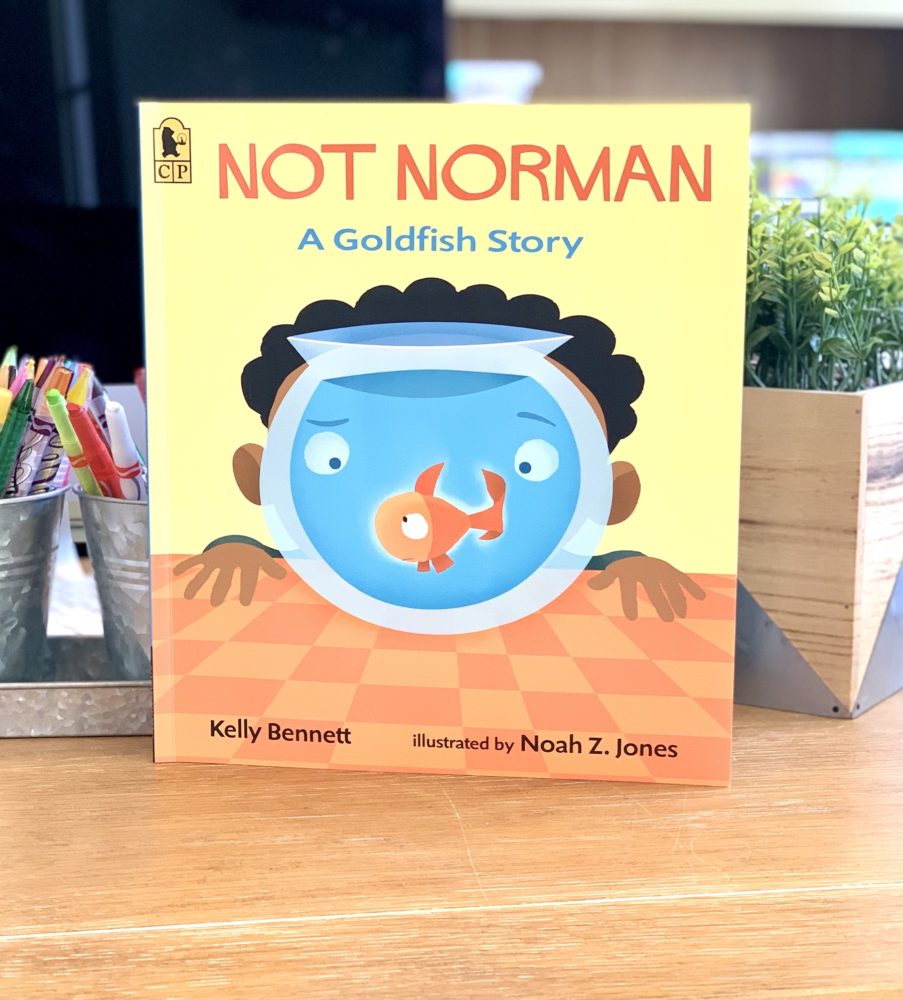 extremely dissatisfied with him.  He names him Norman and has vowed to take him back to the pet shop and exchange him for a different and better pet.  Through different events in the story, the narrator finds that he does have the best pet and decides to keep him after all.

The Library Dragon is a fun little story about a new librarian who has very strict rules in the school library.  Miss Lotta Scales is her name and she was a dragon!  She was hired to take over the library and that she did.  She made the library immaculate however no student was allowed to touch any of the books at all.  And if anyone battled her on this, she would scorch them!  The principal tried, the teachers tried, and even the students tried to reason with Miss Scales, but no one could get through.

It wasn’t until Miss Molly Brickmeyer accidentally wandered into the library, bumped into a bookshelf, and had a book fall into her lap.  She opened it and began to read.  The words of the book drifted into the hallway where other students could hear her reading.  Miss Scales could also hear her reading…  Want to know what happens?  You’ll have to read to find out!

This is a fun book to teach for characterization because you can focus on both character traits of the main character, Miss Lotta Scales as well as her change from the beginning of the story to the end.

Toot & Puddle is an adorable story of two pigs, Toot and Puddle.  One day Toot decides to set off on his biggest trip ever but Puddle 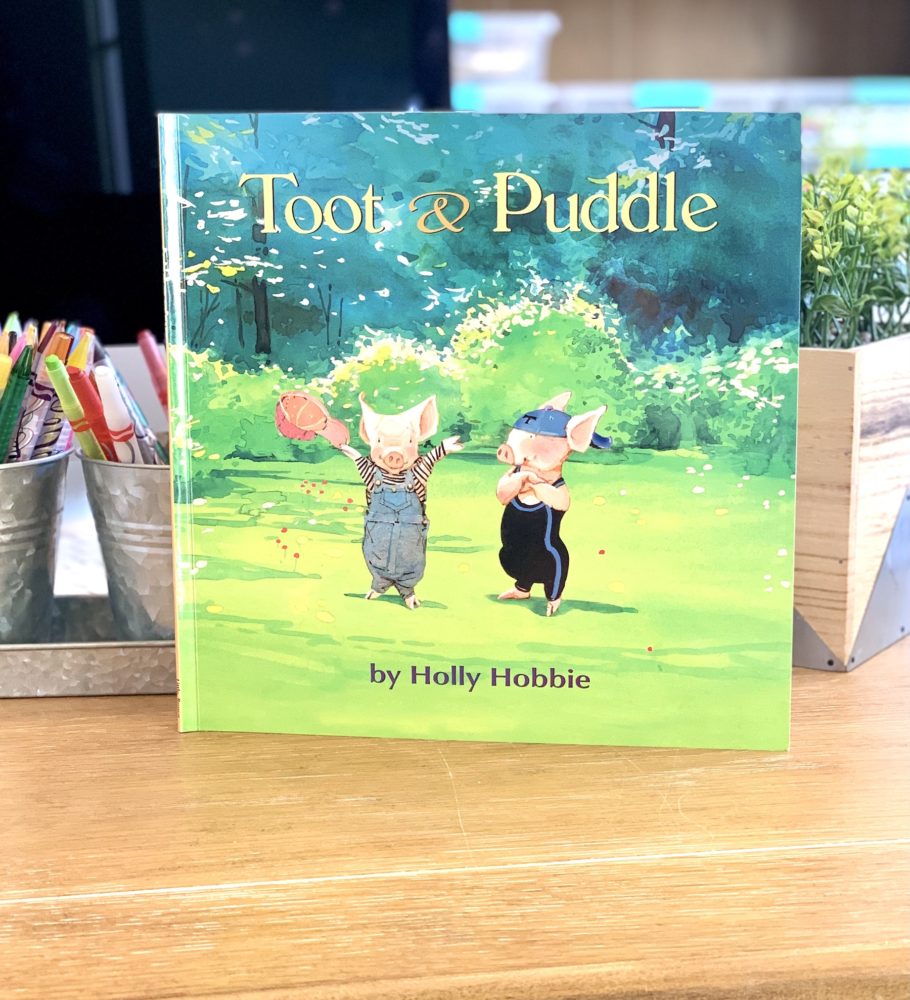 doesn’t come with him.  Toot travels all around the world sending Puddle postcards from the different cities he has visited, but Puddle enjoys staying at home.  Eventually, the two friends miss each other too much and reunite.

This is an adorable story of two main characters who have many obvious differences and similarities and is perfect for teaching compare and contrast of characters!  With Toot being very adventurous and Puddle being a homebody, the students will see the obvious differences, but as Toot travels around, students will have to dig deep to compare the two characters even more.  This is a perfect book for a quick compare and contrast of characters mini-lesson!  Such cute character mentor texts, right!?

Character Mentor Text #5:  The Can Man 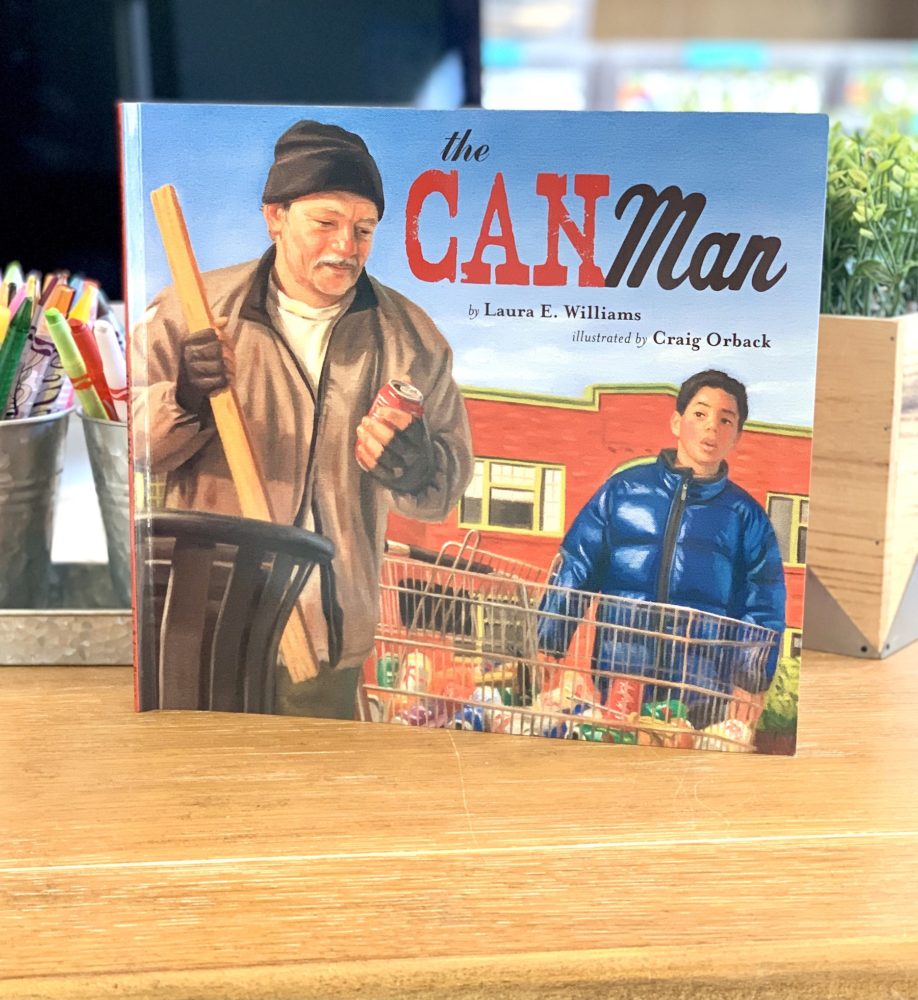 One of my favorite books for teaching characterization is The Can Man.  The Can Man is about a young boy, Tim, who desperately wants to save up money to buy himself a new skateboard for his birthday, so he doesn’t have to keep borrowing his brothers.  Around the city, an older gentleman, whom they call The Can Man, collects cans each day and turns them into the redistribution center for money.  This gives Tim an idea!

Tim decides that he too will collect cans to help get enough money, along with the allowance he has saved so far, to buy his skateboard.  One day, the Can Man asks Tim what he was collecting the cans for. Tim explains that he’s saving for a new skateboard.  Tim asks the Can Man what he collects them for.  The Can Man explains how he lost his job at the auto shop when it closed down and he needs the money to buy a new coat before the snow sets in.

The day comes when Tim finally has enough cans.  Tim and his friend drag all seven bags of cans out the door.  There waiting was the Can Man to help take them to the redistribution center.  Tim gets his money and can’t wait to buy his new skateboard, but is that what he does with his money?  You’ll have to read the ending to find out!

I absolutely LOVE this story!  I think it’s one that students should read every year.  It’s also great for teaching characterization, specifically internal conflict.  Tim, who is a great character to analyze in this story, works hard to get the money he wants but is faced with a decision at the end.  There are hints to which decision he will make and how he is feeling all throughout the story.  You can also talk about how traits influenced the ending of the story.  Truly a great book!

Mr. Lincoln’s Way is truly a magical story.  I think every time I read it, it brings tears to my eyes.  I think not only every student should hear the story, but it should be a 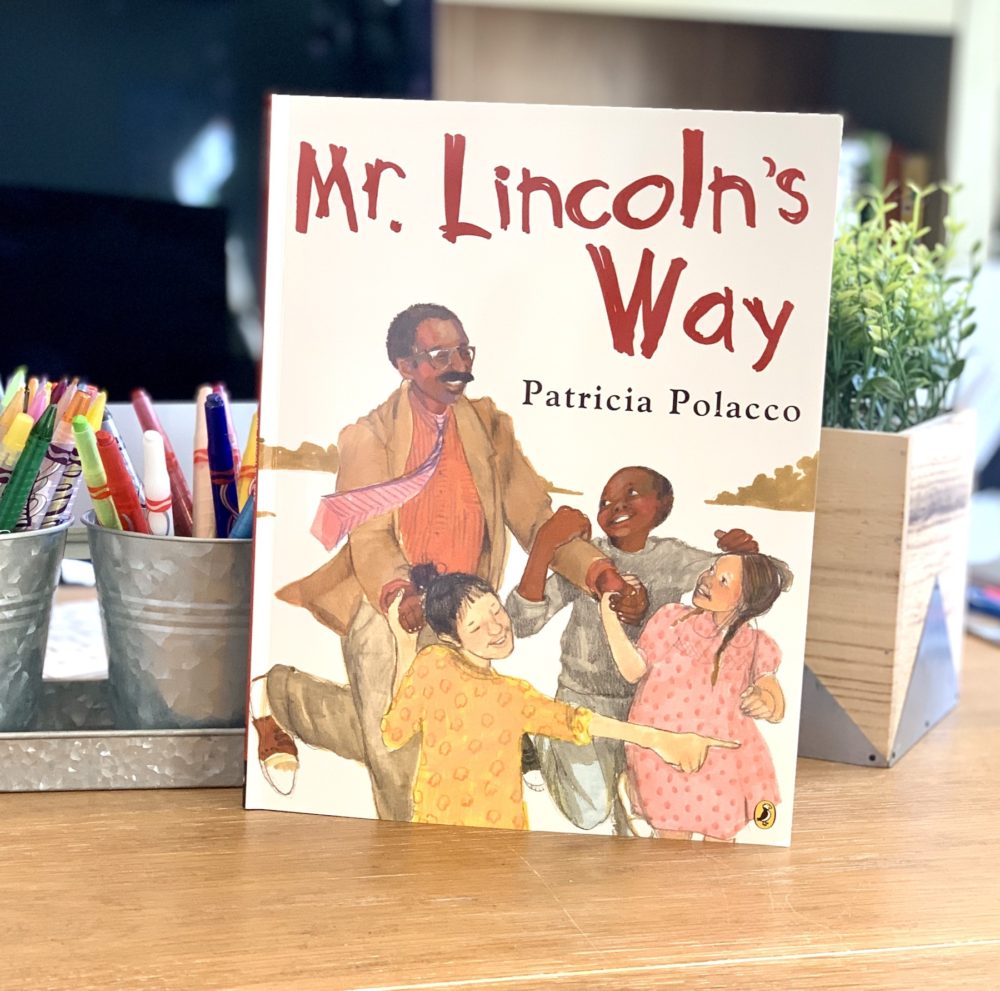 requirement for every teacher to read it as well.  Teachers can resonate with the story just as much as students can, sometimes even more!  In the story, a very well-liked principal of an elementary school, Mr. Lincoln, finds himself needing to connect with a troubled student.  The student, Eugene, gets in trouble often, calls people names, and is a bully on the playground.  One day, Mr. Lincoln spots Eugene watching the birds in the newly designed atrium.

Together, Eugene and Mr. Lincoln work to make the atrium a better place for the birds.  They plant better plants, find better food, and eventually, the birds come.  Together, Mr. Lincoln and Eugene build a relationship that gets down to the root of Eugene’s troubles.

This is one of the best character mentor texts around!  We have two main characters to analyze.  Mr. Lincoln and Eugene both make fantastic characters to dig into.  But beyond that, students will be able to see beyond the story and connect to multiple life lessons for true character discussion.

Which of the character mentor texts was your favorite?  I’d love to find out!

If you love this blog post and want to find more like it, you’re in luck!  Check out my mentor text blog series including mentor texts for teaching making inferences, main idea, and even text structure!

I hope you found new character mentor texts to add to your classroom!  Make sure to pin the image below if you want to save this post for later! 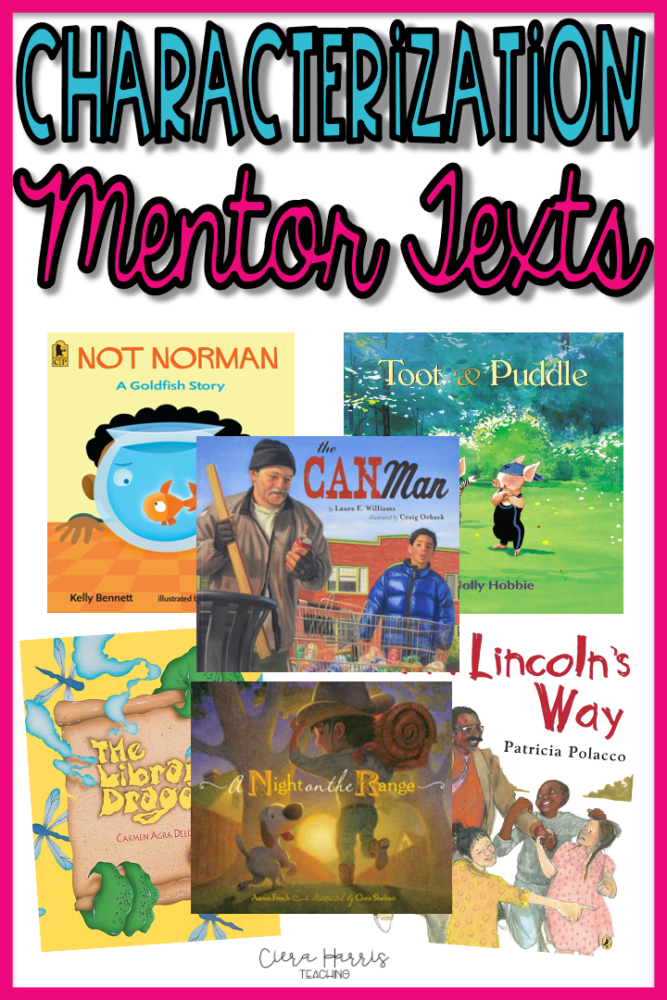 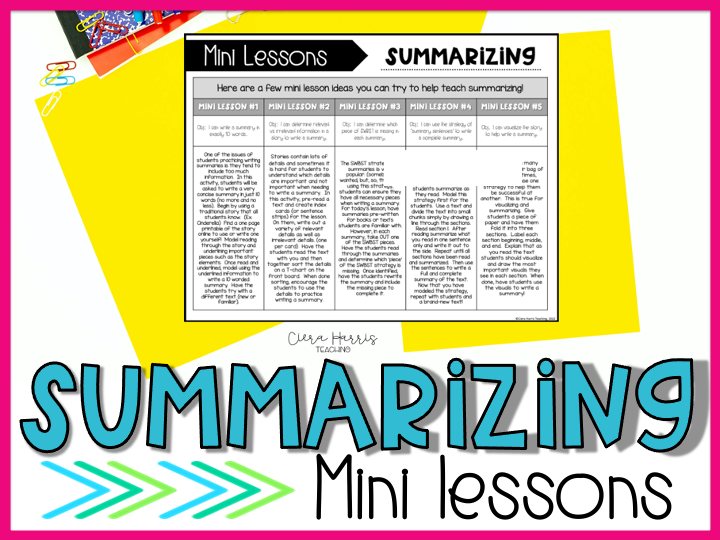 Have you ever summarized a situation to someone and realized you went over every little detail? Honestly, this happens to people all the time! It 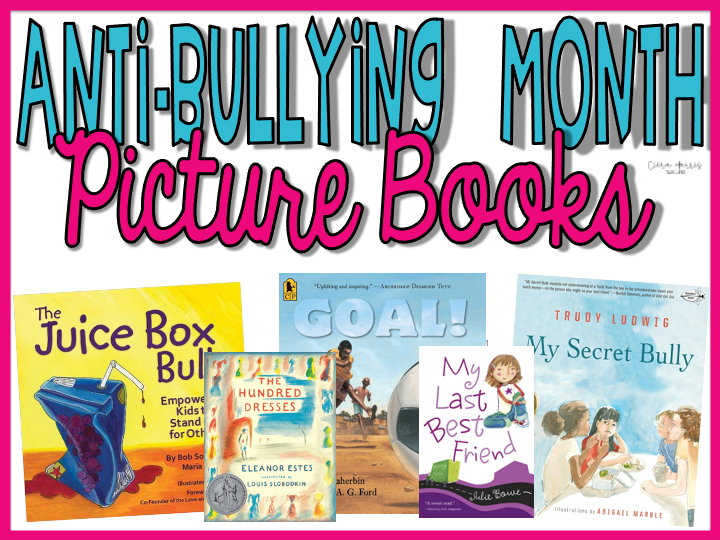 (This post contains Amazon affiliate links.  This means that Amazon sends me a little pocket change, at no cost to you, if you purchase through 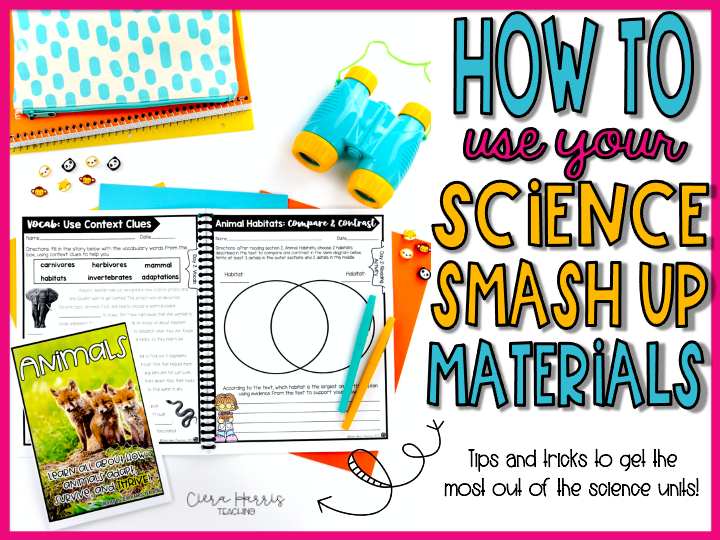 How to use Science Smash Ups in your Classroom.

Whenever searching for a new resource, it can seem daunting to figure out HOW to use it. For instance, how do you take the product